Si and Ge have the same crystalline structure, and although Si-Au and Ge-Au binary alloys are thermodynamically similar (same phase diagram, with the eutectic temperature of about 360°C), in this study, it is proved that Si and Ge nanowires (NWs) growth by electron beam evaporation occurs in very different temperature ranges and fluence regimes. In particular, it is demonstrated that Ge growth occurs just above the eutectic temperature, while Si NWs growth occurs at temperature higher than the eutectic temperature, at about 450°C. Moreover, Si NWs growth requires a higher evaporated fluence before the NWs become to be visible. These differences arise in the different kinetics behaviors of these systems. The authors investigate the microscopic growth mechanisms elucidating the contribution of the adatoms diffusion as a function of the evaporated atoms direct impingement, demonstrating that adatoms play a key role in physical vapor deposition (PVD) NWs growth. The concept of incubation fluence, which is necessary for an interpretation of NWs growth in PVD growth conditions, is highlighted.

Controllable and uniform doping of nanowires (NWs) is the ultimate challenge prior to their effective application. Si NWs amorphize and bend toward the impinging ions under ion irradiation as a result of viscous flow. We demonstrate that thermal annealing induces a full recovery of the crystalline phase corresponding to the unbending of the NWs. The competition between Solid Phase Epitaxy and Random Nucleation and Growth at the nanoscale is the key parameter controlling the recovery.

We demonstrated the heteroepitaxial growth of single-crystal faceted Ge nanowires (NWs) by electron-beam evaporation on top of Si(111) substrates. Despite the non-ultrahigh vacuum growth conditions, scanning electron microscope and transmission elec- tron microscope images show that NWs have specific crystallographic growth directions (111), (110), and (112) and that specific surface crystallographic planes (111) or (110) correspond to the (110) and (112) growth directions. Moreover, we studied in detail the Ge NWs structural properties. The temperature dependence of the NW length and of the frequency of each crystallographic orientation has been elucidated. Finally, the microscopic growth mechanisms have been investigated.

The growth mechanisms of epitaxial Si nanowires (NWs) grown by electron beam evaporation (EBE) and catalyzed through gold droplets are identified. NWs are seen to grow both from adsorbed Si atoms diffusing from the substrate and forming a dip around them, and from directly impinging atoms. The growth of a 2D planar layer competing with the axial growth of the NWs is also observed and the experimental parameters determining which of the two processes prevails are identified. NWs with (111), (100) and (110) orientation have been found and the growth rate is observed to have a strong orientation dependence, suggesting a microscopic growth mechanism based on the atomic ordering along (110) ledges onto (111)-oriented terraces. By properly changing the range of experimental conditions we demonstrate how it is possible to favor the axial growth of the NWs, define their length and control their crystallographic orientation.

We have elucidated the mechanism for B migration in the amorphous (a-) Si network. B diffusivity in a-Si is much higher than in crystalline Si; it is transient and increases with B concentration up to 2 x 1020 B/cm3. At higher density, B atoms in a-Si quickly precipitate. B diffusion is indirect, mediated by dangling bonds (DB) present in a-Si. The density of DB is enhanced by B accommodation in the a-Si network and decreases because of a-Si relaxation. Accurate data simulations allow one to extract the DB diffusivity, whose activation energy is 2.6 eV. Implications of these results are discussed.

What is the difference between the skin of the Statue of Liberty in New York, and an electric wire? Both are made of the same material (copper), but they have different properties because of the shape. Now, get your shrinking machine and make your electric wire smaller than one of your hair. Do you expect the wire to keep the same properties? Nope, of course!

You can do really amazing thing just changing the shape and the size of any material. This is what I did to enable new light sources made of silicon. All our electronics devices are made of silicon. Unfortunately, it cannot emit light by itself. But, if you fabricate a silicon wire smaller than a virus, things will change.

I investigated the growth of silicon and germanium nanowires by a self-assembled method, using electron beam evaporation. This is a relatively unexploited technique that offers a pathway towards high throughput production. By properly varying the experimental parameters of the evaporation it is possible to define the length, density and crystallographic orientation of the wires. The structural properties have been correlated to the atomistic growth mechanism. Moreover, we explored the possibility to bend and restore the wires. Ion beam irradiation amorphizes the nanowires, causing their bending in the direction opposite to the beam. A full recovery is possible after thermal annealing. 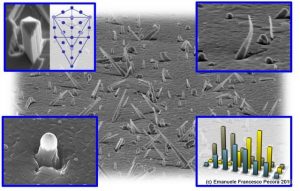 I explored a top-down approach as well. Metal-Assisted Chemical Etching is a full VLSI compatible process to grow very thin nanowires of arbitrary length and controlled doping. Room-temperature photoluminescence and electroluminescence has been demonstrated from silicon nanowires. Moreover, I introduced an innovative approach, based on the combination of standard Electron Beam Lithography and reactive ion etching, for nanopatterning nanowires in any arbitrary geometry. We demonstrate broadband photoluminescence enhancement up to approximately one order of magnitude after a reliable engineering of periodic and aperiodic array patterns. 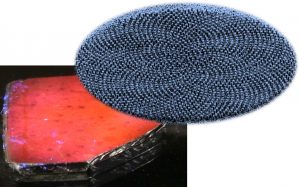 These projects have been funded partly by University of Catania and CSFNSM (Growth and characterization of Si and Ge nanowires), and performed during my PhD course.